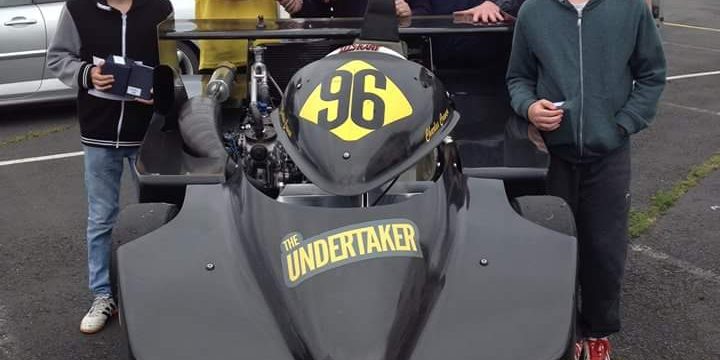 Saturday was a gorgeous but windy day at Kirkistown for Round 5 of the NI Superkart Championship; this saw drivers from as far as Scotland and England taking part in the event. Apart from the 500 Club trophies up for grabs the Paul Fox Memorial trophy was the highlight of the day. As you might be aware Liam Fox who competes in the 250 Div 1 class and would be one of the front runners over the past few years would have been Paul’s brother. Liam put this trophy up back in 2004 after the sudden and tragic death of his brother Paul who was unfortunately killed in a motorcycle accident which was not only a big loss to Liam but also all his family and friends. The Superkart paddock would remember Paul as before 2004 he would have attended all the meetings helping Liam spanner at the kart to get the best out of it on the day. Although Paul was quiet he would have still passed himself and enjoyed the banter with in the Superkart family here in Northern Ireland. On behalf of the Superkart Family Paul you are still thought off to this day and sadly missed by all!

Past winners of the Paul Fox Memorial Trophy were multiple British Championship winner Steven McAdam, Championship winner Ciaran Peden, Richard Dewart, Catherine Foster, Dessie Black and now the trophy was so deservedly won by and taken back to England by Charles Craven 250 Div 1 runner up in the 2014 British Championship. THE UNDERTAKER!! On behalf of the NI Drivers it was good to see Charles over as he has supported the Superkart events this year here in N Ireland very well indeed and a big congratulations to him for not only lifting the outright win here on Saturday but also for winning the Paul Fox Memorial Trophy, WELL DONE CHARLES!

Next Superkart event will be back at Kirkistown on the 25th July 2015 which will be a great day’s entertainment for all the family, hope to see you there.